Hyenas broke into our camp’s food supply during the night. The Maasai ran them off—as well as a lion. That’s what I heard anyway. I slept through it all.

Tall and lean, several warriors of the Maasai tribe guarded our campsite. Silent and serious, one stood just outside our tent. He wore a traditional shuka, a large, draping piece of material that also converted to a shawl or a sash—depending on what was needed. Even in the dim light of dawn, I recognized the bright red of the well-known Maasai plaid. He carried only a spear, his feet bare.

The irony was not lost on me, how our group arrived with fancy backpacks, heavy boots, and titanium watches that handled watery depths of 3,000 feet. But it was obvious who really had it going on here.

After drinking a cup of hot tea beside an early-morning campfire, I climbed aboard our safari van provided by the tour company, Abercrombie & Kent for our first game drive. Our driver, Danny, was from a different tribe: Kikuyu—the largest in Kenya. He had an easy, if shy smile, and I liked him right away.

We took off across the plains, Danny pointing out specks in the distance. “Hiruffs”, he said. As we got closer, I translated “hiruffs” to mean “giraffes”. We saw zebras, ostriches, cheetahs, and “gozzles,” (gazelles). I discovered that warthogs really do hold their tails up when they run, and lower them when they stop, and hyenas have a slumped, sneaky trot, their thick necks like those of muscle-bound weightlifters. 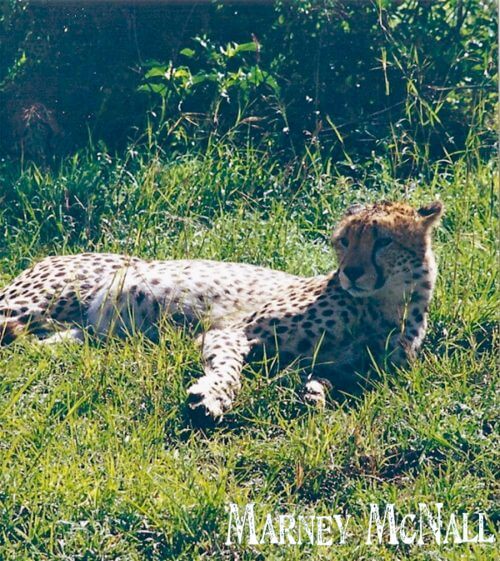 But when your driver’s eyes bulge in fear, it’s a big deal. Literally. A thicket of bushes rustled and parted to reveal a long-tusked elephant beating the ground with a tree branch. “He’s going to charge,” Danny said, fishtailing us out of there. From a “safe” distance, we watched a family of seven, including baby elephants, head in the opposite direction, single file, holding each other’s tails. Such a marvel to see.

I don’t know how long people will have the chance to see these amazing animals out in the wild. Poachers are now killing 30,000 elephants every year—one every 15 minutes, according to National Geographic. Poachers wipe out whole families. Soon. They. Will. Be. Gone.

To help protect these majestic elephants, visit the National Geographic Society and make a tax-deductible donation.

Later that same day, I took the above photo of the elephants. Another incredible gift that I hope you’ll have a chance to see, too.

Next up in the series: Hippos and lions, mating season, and a little accident.